Reviewed on: Xbox One
Also on:
PC

The Battletoads were products of a strange era, sitting at the intersection ‘90s ‘tude, gross-out cartoons, and the Teenage Mutant Ninja Turtles phenomenon. That’s a peculiar cocktail for a side-scrolling brawler, and a challenging one to reimagine for a modern audience. Does this reboot strike a successful balance between old and new? That’s a fair question, but it’s so far down the list of problems that it’s also irrelevant. The biggest and most pervasive issue is much simpler: Battletoads just isn’t fun.

The classic Battletoads games are traditionally remembered as brawlers, but they also experimented with other gameplay styles, like the infamous turbo bike tunnel. This reboot embraces the same philosophy, bouncing players between different activities for brief minigames or entire levels. But that variety doesn’t translate into entertainment; whether you are beating up aliens, shooting spaceships, or hacking door locks, Battletoads is profoundly uninteresting. Instead of establishing mechanics and building on them, the game sends you through a series of shallow detours.

For example, the third act (of four acts total) has you alternating between two kinds of stages: One is a top-down space shooter, and the other is a 2D platformer. Both types are sterile, bare-bones representations of their respective genres; you blast oncoming ships and then push boxes around in simple puzzles. They are straightforward and boring, and they go on far longer than their simplistic designs can support. Most of the gameplay variations feel this way, from riding on turbo bikes to outrunning an advancing wave of acid. You understand what these sections are immediately, but they wear out their welcome as they get more difficult without offering any interesting twists.

The brawling stages are what Battletoads does best, though that isn’t much of a compliment. Each toad has a slightly different playstyle with unique moves, but varying how fast or strong your character is doesn’t elevate the average combat. The action is familiar but functional; you punch and kick through bad guys, and sometimes your toad’s body morphs into weird objects. A handful of boss fights punctuate the action, but they do more to expose the weaknesses in the mechanics (like trying to hit specific targets with your tongue-flick) than take advantage of them.

Some enemies have complementary attacks and work together, but it usually feels like a free-for-all. The screen fills up with bad guys, projectiles, and other hazards, which can make the action hard to parse. That’s where teamwork comes in handy, since three players can play in local co-op (online is not available). While the extra help is useful during big brawls, playing co-op can be a liability during other stages. For instance, a partner’s dumb mistake while dodging oncoming obstacles on turbo bikes limits the number of chances you have to successfully complete the gauntlet.

Though some elements of the gameplay may test your skills, the story certainly isn’t aimed at seasoned gamers. I didn’t expect a grand narrative from Battletoads, but I was not prepared for how hopelessly lame it could be. The toads’ adventure is packed with scenes that feel sparse or incomplete, full of annoying characters and dumb jokes. This isn’t a “some gags just don’t land” situation; the attempts at humor are so aggressively unfunny that I was cringing during every cutscene. As the art style would suggest, maybe it’s intended for the Saturday-morning-cartoon crowd … but kids probably aren’t the best audience for a challenging reboot of a 25-year-old series. In this confusion about who the game is actually targeted at, it ends up being for no one.

The kindest thing I can say about Battletoads is this: It works. The controls are fine, I encountered no major technical issues, and an optional invincibility feature allows you to easily clear sections that are giving you too much trouble. Simply being playable from beginning to end is a tragically low bar to clear, but it’s the main thing Battletoads has going for it. Otherwise, this baffling experience digs through decades of gaming history to unearth the Battletoads name only to drag it through the mud. 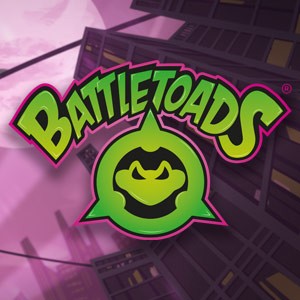 Summary: This unfortunate reboot unearths the Battletoads name only to drag it through the mud.

Concept: Bring the Battletoads back in a parade of disappointing minigames and lackluster combat

Graphics: The visuals have a generic cartoon look that gets the job done, even if it doesn’t have much personality

Playability: Some of the hit detection feels inconsistent, but the controls are generally functional and easy to use

Entertainment: Even though it’s technically a game, Battletoads is not a good time