Today, we got our first look at Far Cry 6, the next entry in Ubisoft’s flagship series. This time around, you lead a guerilla revolution, fighting to free the fictional island nation of Yara from its brutal dictator. Ahead of the reveal, Ubisoft shared a presentation and let us chat with narrative director Navid Khavari. While the studio isn’t ready to talk about gameplay specifics, we were able to dive more into the setting and characters. 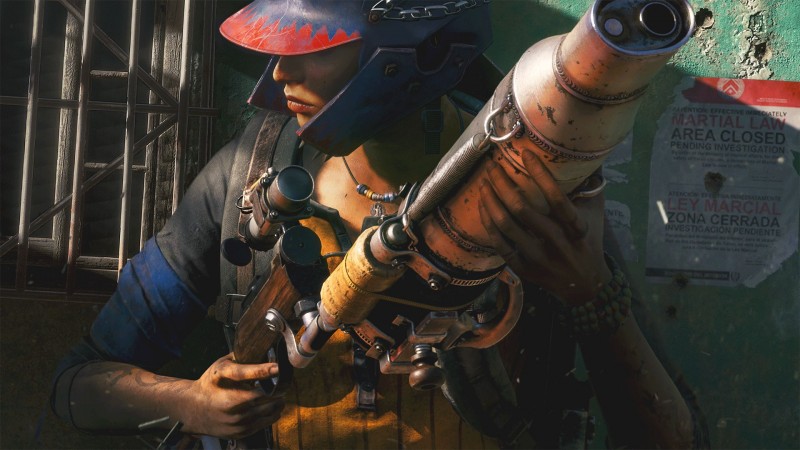 A Fight For Freedom

Welcome to Yara, a tropical paradise frozen in time, located in the heart of the Caribbean. The island has seen better days. As Ubisoft puts it: “Decades of economic sanctions have devastated the nation, leaving it impoverished and divided.” As its dictator’s practices get increasingly more disturbing (more on that below), you’ll get swept up in a modern-day guerilla revolution. Your journey to burn down this tyrannical regime takes you through the island’s lush jungles, dense cities, and beautiful beaches. Ubisoft is calling it “the most expansive Far Cry playground to date.”

You play Dani Rojos, who you can choose to be male or female. “In terms of Dani, what we wanted to do was explore a character that is fully voiced, fully performance captured and you can play as both male and female,” Khavari says. “We also wanted a character that was born and raised on the island of Yara, is a local, and someone who didn’t necessarily see themselves as part of a revolution or an uprising, but who gets swept up in the Libertad movement.”

Khavari says a small team went down to Cuba to take in everything for inspiration. “We got to meet with the locals and explore the culture and the diversity, but we also got to talk to actual guerrillas who fought in the revolution there,” he says. “There are all sorts of reasons people will join up and fight in a guerilla revolution. Some want to shoot guns and feel that adrenaline kick, while others are looking to do it for the country and for the flag. I think that dynamic was really interesting narratively, and then also from the gameplay perspective, the idea of this David versus Goliath dynamic. Also, because the island has been under a blockade for about 50 years, having to make do with what you have was really interesting. In terms of gameplay and also in terms of how you approach Far Cry 6.”

Ubisoft says to expect some unconventional weapons due to trying to make do with what’s available on the island in addition to having vehicles and animal companions. 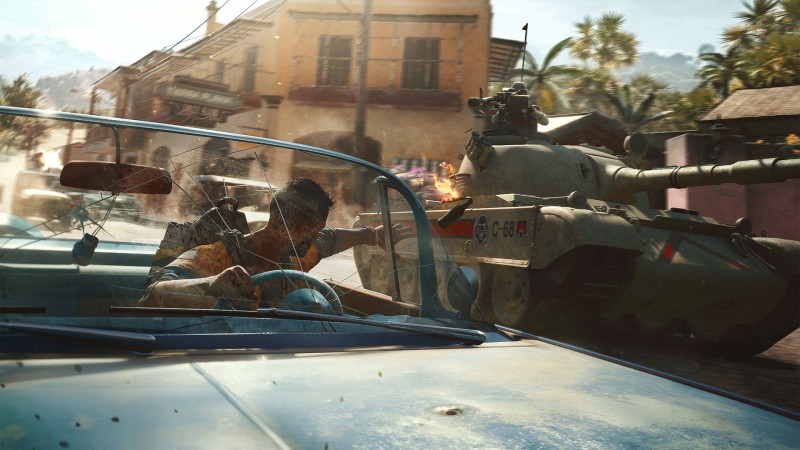 Far Cry is known for its cunning villains. From radical cult leader Joseph Seed to maniacal king Pagan Min, the series is full of intense personalities. Antón Castillo, played by Giancarlo Esposito (Breaking Bad, Better Call Saul), certainly fits that bill and has his own complexities. As El Presidente of Yara, he’s kept the country under his tight control, often resorting to brutal methods to achieve what he thinks is the “greater good.” He was elected to return the struggling island to its former glory and will stop at nothing to achieve his vision.

Antón believes the island was at its best 50 years ago before the first revolution. When we sat down with Khavari, he revealed that Antón’s own father was in charge of the country during that time. “The revolution actually took over and ended up executing Antón ‘s father right before his eyes,” he explains. “So right from the beginning, Antón has grown up with this perspective and mindset and worldview that the island was stolen from his family. And because Yara over the years experienced this economic decline, I think Antón saw that as proof that only the Castillo family can really save Yara. So when he’s elected to power, he does so on the promise to rebuild paradise, to bring Yara back to the money it had 50 years ago. But what he doesn’t say is that that paradise isn’t for everyone, that those who dare speak out against his methods will be rounded up into essentially a forced labor state, one that is forced to work at gunpoint to see his vision of the country.”

The trailer made clear that Antón’s relationship with his son would be an important aspect of Far Cry 6; he’s essentially grooming this young man to succeed him. But will Diego follow his lead? That’s for us to discover when we play. It’s also what makes Antón one of our most interesting villains to date. One minute he’s a cunning leader, the next a caring father.

“The touchstone for us was having this character who was born amidst revolution and developed a very twisted worldview after the execution of his father, but also someone who is a father himself,” Khavari says. “I think there’s just something interesting about what it’s like to be in the room with the dictator and see how they try to justify what they’re doing and see things from their perspective. On top of that, seeing Antón as a character who not only is running a country but is also as a father, trying to pass down these lessons to his son that are twisted and basically brutal and offensive. At the same time, the layer on top of that is he loves Diego. He wants him to grow up safe and secure, and he actually believes he’s doing the right thing. I think that’s something that Giancarlo, who is playing Antón, really keyed in on right from the beginning.”

So where does playable protagonist Dani fit with these two characters and what types of relationships will he have with them? Ubisoft isn’t ready to talk specifics yet, but we did get Khavari to tease more about this aspect of the game. “That triangle of characters between Antón, Diego, and Dani is absolutely crucial,” he says. “What I can say is that with Diego what we found really interesting was this idea of this is a 13-year-old teenager. I think a lot of folks can remember what it was like being 13, at least I do. It’s hard enough to figure out who you are and what you’re gonna do in this world and what does it all mean? But try doing that while also being the son of a dictator who is running a country. We really wanted to create a character in Diego that is riding a razor’s edge – that you don’t know exactly where he’s going to land. Is he going to follow in his father’s footsteps? Is he going to be a brutal dictator himself? Or is he going to forge his own journey, his own path? So I’m excited to see what players think of that.” 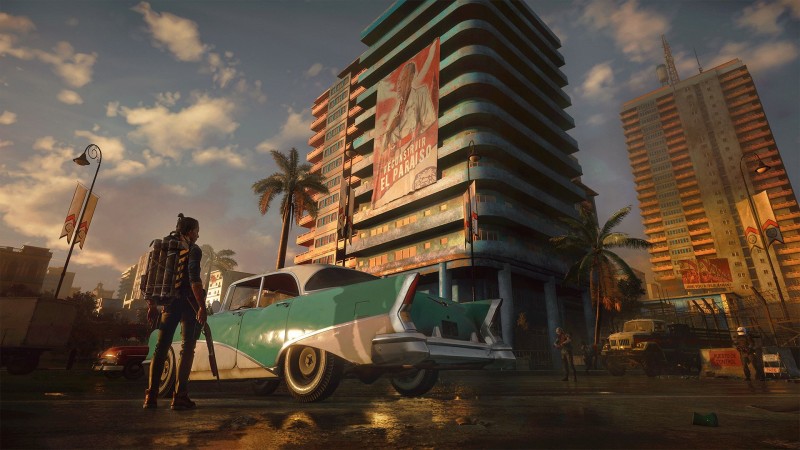 The World Has More Verticality Than Past Games

For a first in the series, Yara houses a sprawling capital city, Esperanza. You can navigate the area more stealthily or go guns blazing in firefights through the streets. “Right from the beginning, we knew that we would want to do a capital city,” Khavari says. “We are going to be talking about a lot of the gameplay elements at a later date, but it definitely changes the way you play and approach things. When you have a city, there’s definitely verticality involved… and you really get the sense of a revolution. Because a guerrilla revolution usually starts in the jungles and in the farmlands, but you sort of circle and approach Antón. And when you attack a city, you just feel the weight of oppression, just in the scale of the buildings, being able to navigate rooftops and alleys. It not only changes the way you play, but it changes how the narrative feels.” 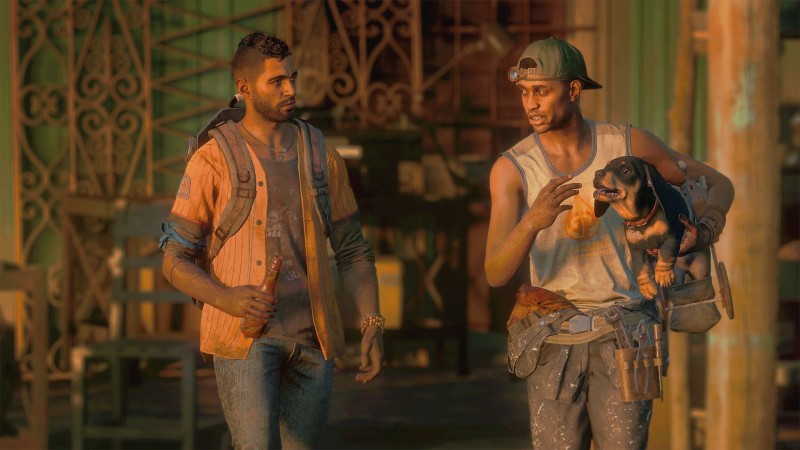 One of the most popular and successful elements from Far Cry 5 is back. This time around, it’s called Amigos For Hire, where you can pair up with A.I. companions to help you. From a jaded ex-KGB spy to an adorable wiener dog, you can call in some backup to your missions. Ubisoft wouldn’t get into specifics, except to confirm this feature is back. According to Khavari, wiener dog Chorizo is the favorite among the dev team. “I can say maybe as a little tease, he kills with kindness, so I’m excited for people to experience that.” 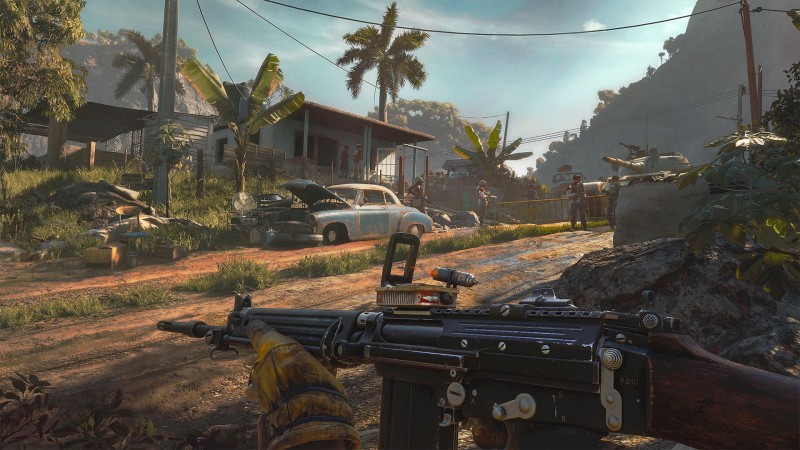 It Already Has A Release Date

Far Cry 6 is set to release on February 18 for PlayStation 5, Xbox Series X, PlayStation 4, Xbox One, Stadia, and PC. Ubisoft confirmed if you purchase the game for PS4 or Xbox One, you can upgrade to a next-gen platform at no additional cost after the launch.