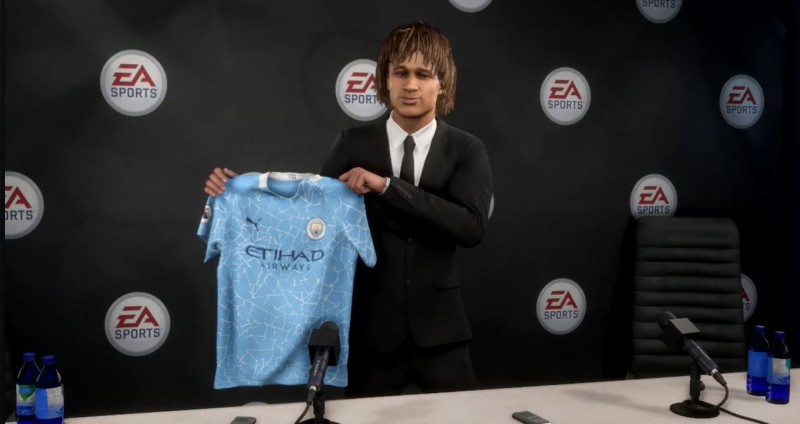 Career mode is a popular destination for diehard fans that dream of managing their own club, from purchasing players during the transfer window to deciding who gets to start each match. You lead the behind-the-scenes affairs like negotiating contracts and managing player morale. Unfortunately, it’s been a few years since this mode has seen any significant upgrades, but that’s finally changing with a slew of new features that give you even more agency over every facet of your team. We recently got some insight into the changes, which give you more ways to adjust tactics during game simulations, customize players to particular roles, and manage the schedule to create a healthy balance between training and rest. Here are the things you need to know.

A lot of players sim matches in career mode, as it’s the fastest way to get to the important decisions and pivotal events that can make or break the season. However, you don’t have to feel completely helpless on the sidelines if you select this option. EA is giving you more ways to intervene during a simulation to change up tactics or put in subs. This means no longer having the fate of the match feel solely up to the A.I.

A new pre-match launcher shows you the team’s probable lineup and their formation, allowing you to make key decisions before you even press the sim button, such as if you want to change up your team sheet or use a different formulation that better counters theirs. You can then choose to either directly play the match, quick sim it to the end, or choose merely “sim” which will show how things are playing out in real time at twice the speed. While this is going on, you view players’ stamina, their ratings,  match stats like chances created, and gameplan options. This gives you information to work with throughout the match, such as subbing out a player whose energy is getting low or not performing as anticipated. Or maybe you score a goal and decide to change your tactics to be extremely defensive to protect the lead. At any point, you can also jump in and take control directly, and this happens pretty seamlessly. 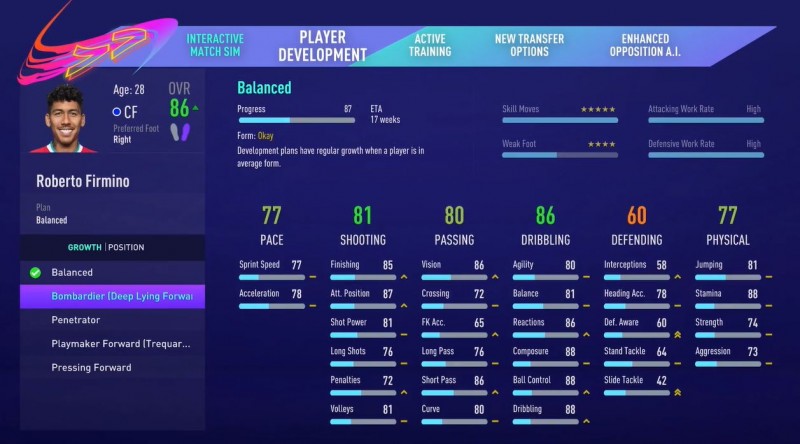 More Control To Build Players How You Want

In the past, you had little control over player development outside of training your players and putting them in matches, and they all had pretty strict positions and growth charts. While FIFA 20 added dynamic player potentials, it still wasn’t much in regards to customizing your squad. This year’s career mode is giving you more flexibility to build players how you want and to fit your needs.

Player growth has been revamped. With new development plans, you can now pick specific areas for players to focus on, such as their dribbling or finishing skills. Veteran players will also make use of these plans, allowing you to select which attributes they should try to maintain to stay competitive. Besides attributes, you can also tweak weak foot, skill move ratings, as well as work rates. Different parameters such as playtime, match rating, and opponent difficulty will help accelerate players’ growth.

By default, all players will be set on a balanced development plan, but for those who want to tinker, you can create targeted plans. For instance, you can choose for a forward to be a playmaker, bombardier, pressing forward, or penetrator. EA said they’re still figuring out how many training plans for each position, but there looked to be a varied amount already.

One of the biggest changes is you now have the ability to change player positions, so if you have a surplus at a position and think your player would be better suited elsewhere, you can make those adjustments. You’ll have to choose wisely though, because sometimes the effort to convert a center back to a striker is just not worth your time. 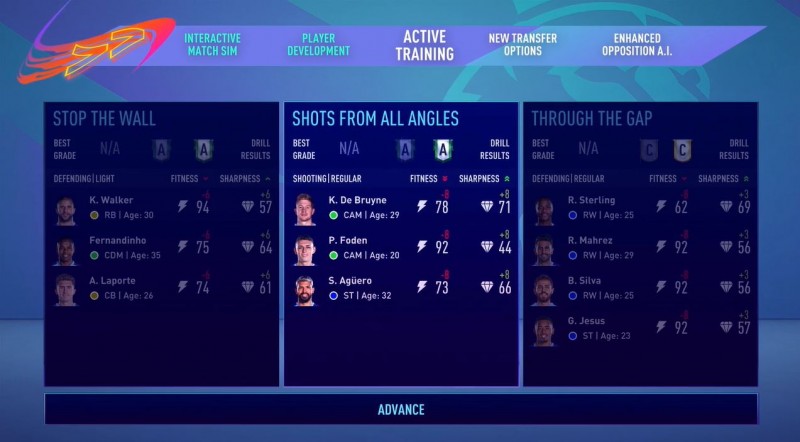 Sharpness is the new indicator for player readiness before a match. Sharpness, paired with player morale, will impact player attributes during a match. The bigger the sharpness value, the better the player will perform on the pitch. Sharpness can be increased by playing matches or through training sessions, but doing the latter will take some of the player’s fitness in return. Basically, you need to balance sharpness and fitness through training sessions before matches to be a successful manager.

Training sessions are pre-populated, using your active team sheet for the players involved (but you can make manual changes as you see fit). A new training hub allows you to assign groups of players to specific drills. Gone are the days of picking five individual players to train from week to week. However, now the grade you get when you sim a drill, is the grade you get when you play it. If you just sim them, the highest you can get is a “D.” A good strategy is to get an “A” on all the drills at least once, so your players will always get the most out of their training.

Every drill has a different setup, intensity, and number of participants. This means you may want to get as many players as possible up to a better level by doing a hard drill that may sacrifice their fitness; while at other times, you will want to pick an easy drill just to maintain players’ current levels. You have three different drills you can select with the peak number of participants being five. Technically, you can train fifteen players at once this way, but if you do drills with less players, they are more-focused and often boost their sharpness higher than if they were in a larger group. There’s a lot of different decisions to weigh.

Because sharpness and fitness are such an integral part of winning games, EA added an extra layer to your time as manager: schedule planning. You must decide how much you want your players to train versus how much rest they need to still perform well and have high morale. This allows you to adjust the schedule how you see fit by establishing different rules. For instance, in a month packed with games, you might want to set a rule to rest after every match just to keep your players happy and healthy. Or maybe you have a big match coming up and want your players as sharp as possible, so you schedule more training sessions beforehand. You can then have them rest after the big showdown when there are easier opponents on the schedule.

To sum all this up, you will see three different levels for players: fitness, sharpness, and morale. Managing all of these will be a difficult balance but an important part to having success at your role. To take full advantage of attribute bonuses earned from these areas, you need to pay attention to certain things like playing someone at their preferred position. You can sometimes get away with putting someone at a less desired position if they have high morale and sharpness. Moving players around on your squad screen, it will show you the different boosts you can get, so you can make informed decisions for your strategy. 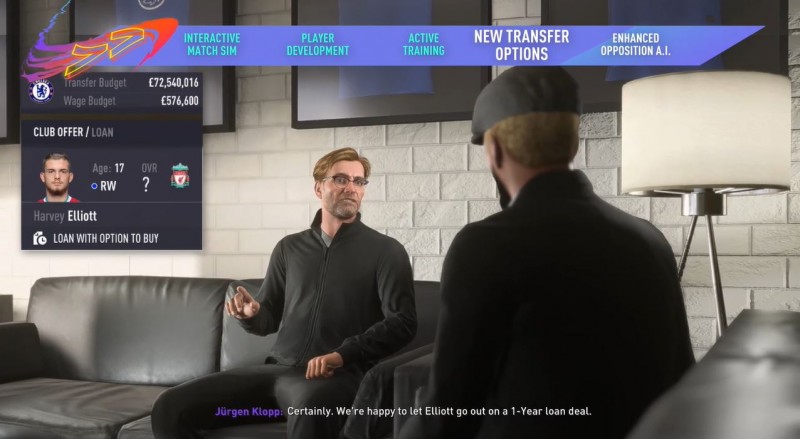 EA has assured us that you can dive as deep as you want into any of these systems and there will be plenty of default options for those who don’t want to get into the nitty gritty. Career mode was long overdue for some new lifeblood, so I’m excited, especially as someone who loves to tinker with stats and bonuses. I just hope that managing schedules doesn’t become a tedious task; I had enough of that in NBA 2K. Otherwise, it looks like there’s a lot of interesting challenges here. Not to mention, EA also improved the onboarding for this mode, added new loan-to-buy negotiation options, and provided new setup options so you can start the season with a financial takeover or adjust negotiation strictness. The latter means you can make the experience more realistic so players won’t move to rival clubs and stars won’t go anywhere but to the top leagues. I can’t wait to test it all out.

What do you think of the new additions to career mode? Let us know in the comments below!