The latest Ubisoft Forward event put the spotlight on Immortals Fenyx Rising, the game formerly known as Gods and Monsters. The open-world action game has transformed since we saw it at last year’s E3, and those changes go well beyond its new name. Ubisoft said it rethought the tone, hero, and universe, but it still remains a game steeped in Greek mythology, where you come face-to-face with large-than-life mythical creatures.

The star of this third-person adventure is the customizable character Fenyx, who is the Greek gods’ only hope against the revenge-hungry antagonist Typhon. You’d have some pent up rage if Zeus imprisoned you under a mountain, too, and Typhon’s first act is releasing vicious monsters and corruption throughout the land. A prophecy says Fenyx will save the Gods, and so our hero will work to earn their blessings and legendary weapons to bring Typhon down.

We spent two hours with Immortals Fenyx Rising and were transported to the middle of Fenyx’s journey. Here, we explored the region The Forgelands, home to the God of the Blacksmiths: Hephaistos. This land was inspired by fire and volcanoes, and our main story mission is to restart a forge and defeat a boss. After that, we were free to explore the open-world to our heart’s content until our two hours were up. Here are our biggest takeaways from the experience: 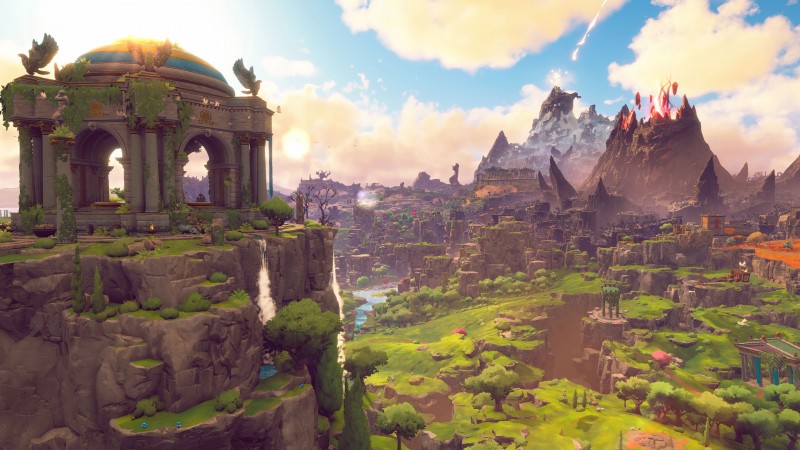 A Vast World That Begs For Exploration

Open worlds are core to the Ubisoft formula, so its developers have learned quite a bit about what draws people in and keeps them exploring. Immortal Fenyx Rising is no different, taking things you love from Ubisoft’s other franchises, particularly Assassin’s Creed, and bringing its own twist with its Greek-mythology-infused backdrop. During your time, you’ll fight iconic creatures such as cyclops, gorgon, and minotaur and visit seven distinct regions that take inspiration from different Greek gods and goddesses, such as the lush landscapes of Aphrodite’s plains and the mechanical world of Hephaistos’ forge.

Similar to the Assassin’s Creed series, you have a companion bird, Phosphor, whose farsight allows you to zoom out and scout for treasure, points of interest, and challenges to mark on the map. Vaults of Tartaros, obstacle-ridden areas that require you to pull out a slew of your different abilities, like platforming over dangerous obstacles or using your bow and arrow to activate switches, dot the map.

In addition to vaults, you can hunt down myth challenges to earn extra rewards, like new equipment or crafting materials for potions. For instance, a navigation challenge might require you to quickly reach an area without touching the ground, while a constellation challenge has you searching for pieces to recreate a pattern. Lyre challenges force you to remember the order of musical notes, while Frescos have you rearranging tiles to complete a picture of ancient Greek mythos. Exploring the world, I always felt there was something to do and collect, and most importantly, it held that exciting possibility of finding that next big armor upgrade around every corner.

Fluid Movement Helps You Explore To Your Heart’s Content

The world is big, and there’s no shortage of ways to explore. First off, you have the Wings of Daedalus that give you the power to fly in the air and avoid combat, but the stamina meter prevents you from relying completely on this tactic for traversal. You can also find various mounts that allow you to swiftly bypass enemies, but you’ll also need to slow up to restore their stamina occasionally. Lastly, verticality is a big part of this world, and you’ll often find yourself climbing your way to destinations. Oh, and sometimes you’ll need to swim to reach certain areas.

What I found most interesting was how easy it was to swap between the main methods of traversal. I would have my mount sprint to a cliff and use my wings to launch myself in the air until I found a ledge for climbing. It all happens very seamlessly and feels natural, meaning getting around never feels like a chore. However, for those wondering, there is fast travel that unlocks once visiting certain points if you want to shorten your trips. 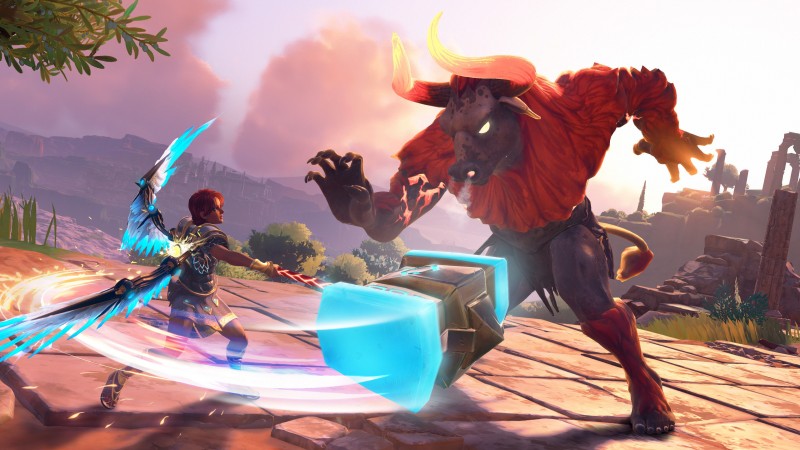 When you’re fighting against mythical baddies, you want to feel like you have the power to match them. Ubisoft didn’t hold back here, as you engage in fast and acrobatic combat that is as over-the-top as the enemies you face. You have your light and strong attacks to do damage up close with your sword and axe weapons, but you also have a bow and arrow for ranged attacks and to shoot down airborne enemies. The most exciting part of Fenyx’s arsenal is her powers from the Gods and how you experiment with them to unleash deadly combos. You can do everything from summon your bird Phosphor to dive bomb the enemy and distract it, swing Hephaistos’ giant hammer for a huge AOE attack, or use Ares’ deadly spears to thrust enemies in the air. However, you can’t just blindly spam your special attacks; you have a stamina gauge to consider in battle, which you charge up by performing combos, think AC: Odyssey’s adrenaline meter. Also, if you execute a perfect dodge, time slows down briefly, allowing you to pummel the enemy. All your skills can be upgraded for additional combos and perks. 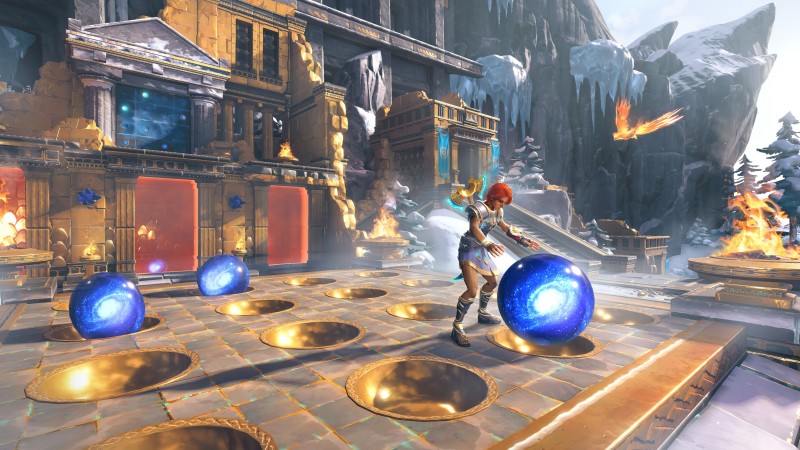 Plenty of obstacles present themselves in Fenyx’s journey and you’ll need to figure out ways to overcome them. “Puzzle-solving was important because we have a pretty intense experience in the fight and the traversal,” says associate game director Julien Galloudec. “We wanted something that can be a pace breaker, where you can be more focused and go at your own pace on something that is more challenging in logic or the observation of the environment. We made sure to have a lot of variety. So we have puzzles that are going to challenge your dexterity, your memory, your manipulation of the environment.”

For some examples of the puzzles we faced in our hands-on, in our story quest, we had to discover how to restart a forge. This required throwing coal into the furnaces and then shooting our arrows through fire to light it. Most puzzles are simple like this, mainly requiring moving objects to activate various switches, but some are more complex requiring you to think carefully. In another one, I had deadly laser beams surrounding me and had to move a crate to block them, which seems easy in theory, but you need precision when placing the boxes and are constantly shuffling them around to new areas. The majority of these encounters feel very reminiscent of Breath of the Wild’s physics-based puzzles and your Magnesis ability to carry objects, almost to a fault.

Unfortunately, the puzzles often felt more tedious than fun; an item you need always seems to be on the opposite side of the room, or you’re having to jump through hoops just to complete a simple task like finding the object you need to place. I got excited when I came across a creative puzzle in a vault where you had a huge rock that you hit with paddles like a pinball machine. I was delighted to have something that wasn’t “move A to B,” but then this rock moved like molasses, never picking up enough momentum to replicate the excitement of a pinball game, and it quickly felt like a drawn-out chore. At the very least, you do get some pretty sweet treasure for completing the optional puzzles tied to challenges. 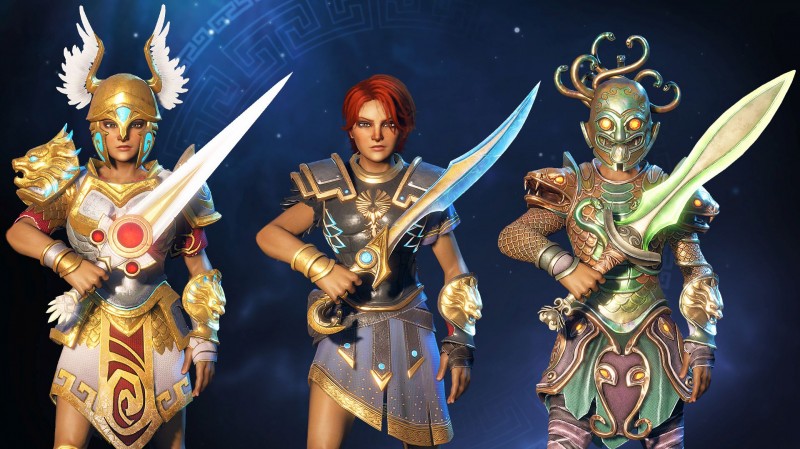 Customization Is A Big Hook

If you’re someone always on the lookout for your next big shiny, Immortals is for you, especially in terms of your equipment. Every armor and weapon you pick up is reflected visually on your character, and one of the biggest draws is unlocking something better and more visually stunning for Fenyx. All gear has its own stats and abilities alongside being able to customize colors and variations of it. “It’s part of the exploration loop where you get to find a new kind of armor, and sometimes it is going to be a new skin for that armor, and you can mix and match your elements, your armor, but also the wings,” Galloudec says. “So you’re going to find different types of Wings of Daedalus in the world. And basically each time we added something on the character, we made sure that you can customize it.”

During my playthrough, I joked that Fenyx had been through some major wardrobe changes since I first entered The Forgelands. I started in standard gray and gold plated garb, but at one point, picked up a darker, heavier armor with fire radiating off it, and finally unearthed this epic chest that gave me “Skin of Pride,” a more dignified, classic ancient Greek attire that added the perk of 250-percent defense when at full health. It’s these discoveries that make the experience fun, and seeing it reflected on your character is just the icing on the cake.

Want to see Immortals Fenyx Rising in action? Check out our latest New Gameplay Today, where we show off more of the combat, bosses, puzzles, and armor finds.