I was already interested in Sucker Punch’s samurai epic Ghost of Tsushima when I heard that it was, for all intents and purposes, the Assassin’s Creed game set in Japan that fans of that series have been begging for. My enthusiasm scaled even higher in May, when Sony highlighted the game during a livestreamed event and revealed something I didn’t even know I’d wanted all along: Kurosawa mode. This setting gives players the option to play through the entirety of the adventure with black-and-white visuals, a weathered-film effect, and compressed sound evocative of ‘50s cinema. Coupled with subtitled Japanese voice acting, I was all in. Now, after spending several dozen hours playing Ghost of Tsushima almost exclusively in Kurosawa mode, I can report that it’s about as good as I’d hoped for – even though there are some caveats that I couldn’t have anticipated.

Kurosawa mode is, in a word, breathtaking. Even though I doubt the game’s visual design was cobbled together with black-and-white visuals in the front of the team’s mind, you might be able to convince me otherwise. Vistas are striking and atmospheric, with events such as thunderstorms and dramatic showdowns losing little – if any – of their visual appeal. At least, that’s what I’m guessing. I turned the Kurosawa option on from the start, and aside from switching over to take some screenshots for this piece (and a few other moments we’ll get to in a second), it’s how I’ve experienced everything so far.

The visuals are an easy thing to spot, but the sound is also great. It’s difficult to describe, but the sound range has been consciously crunched together to be a bit less dynamic than it would be otherwise. It’s not tinny, but it’s close. Certain effects, such as the wind, also have a more prominent position in the mix. Having just rewatched Seven Samurai in preparation for the game, the audio captures its soundscape remarkably well.

If the sound and the visuals evoke old samurai movies, you can just turn Kurosawa mode on and enjoy, right? Well, mostly. A couple of things prevent me from making it an automatic recommendation, even for fans of samurai cinema. I won’t get into any spoilers (I promise!), but I will outline a general type of mission in a completely vague way that shouldn’t ruin anything for you.
There are a couple of missions (they call them “tales” here) during the first of Ghost’s three acts that have you track down a location using visual clues. Love it. Well, that is, I loved it until the text “Search for violet flowers” appeared on my mission objectives. Violet flowers? Umm, OK? I wandered around in the plains for several minutes, and occasionally the tale text would change slightly to following the trail of flowers. Then I’d get off track (a track, I should note, I wasn’t sure when I was on in the first place) and have to “find” the flowers again. 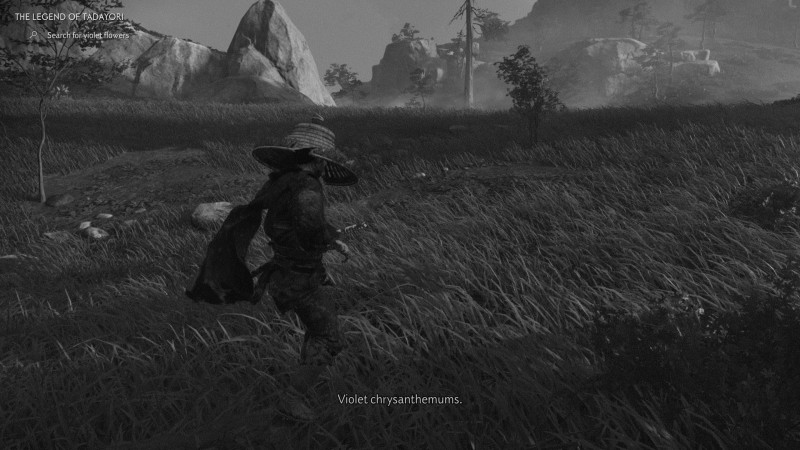 To be fair, these specific flowers are distinct from the other grasses, flowers, and vegetation in the area when you do know what to look for – but getting that far is a long shot. Eventually, I had to turn colors on just to get a clue of where I should be heading. That’s not the biggest problem I’ve encountered in a game, to be fair, but it was annoying. In a sense, I was as helpless as I would have been if Sucker Punch decided not to subtitle the Japanese in a particular cutscene.

The bigger issue that I’ve come across is a matter of life and death – at least within the context of the game. Combat in Ghost of Tsushima is based on stances, counters, parries, and dodges. It’s pretty standard stuff, though I think the way you can change stances mid-fight gives a nice sensation of combat mastery. Anyway, enemy attacks give off an X or slash-shaped flash when they’re either unblockable or can be parried. When you’re playing traditionally, these flashes are either red or blue. In Kurosawa mode, they’re … white X or slash-shaped flashes. Without that additional layer of color information, it makes it tricky to fight effectively – or at least that’s been my own personal experience. 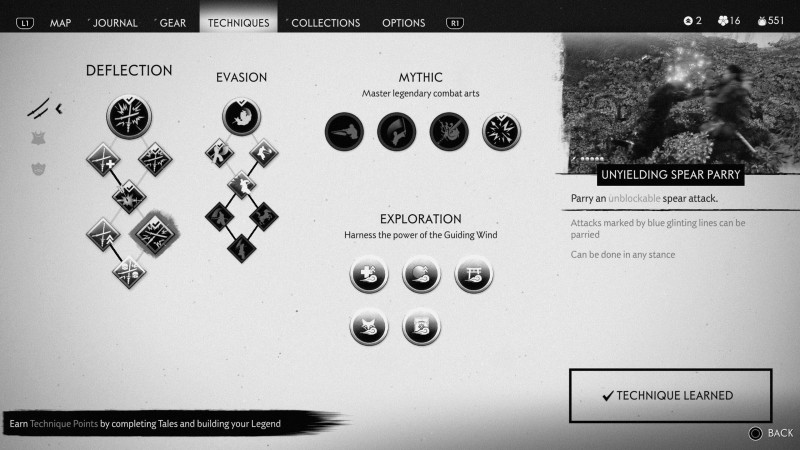 This particularly noticeable when fighting enemies such as spearmen, who can finish you off quickly if you don’t get out of the way or knock their spears aside with your sword. You can eventually unlock an ability that lets you parry their otherwise unblockable attacks, which makes these encounters much easier to handle. But in crowded fights when you have different enemy types firing off a variety of attacks you can parry or dodge, it is effectively impossible to parse which counter you should perform. I’ve relied on dodge-rolling much more than I suspect I would have if I’d started playing with that extra visual information; rolling will help you avoid damage in both cases, though you lose out on the chance to deal satisfying lethal blows after throwing the enemy off-guard with a perfect parry.

Just as an aside, since we’re talking about combat, I was a little disappointed that Kurosawa mode doesn’t also enable or give the option of adding the comically powerful geysers of blood that originated in the director’s 1962 film Sanjuro. We can always hope something along those lines comes in a later update. OK, maybe not.

When Matt Miller reviewed Ghost of Tsushima for us, he marveled at the beautiful color palette and exaggerated natural beauty. I think both of us agree on the latter point, even if I’m not fully equipped to talk about Ghost’s use of the color spectrum. There are moments, such as going through a grove of drifting cherry blossoms, which translate perfectly well. Other locations are inarguably beautiful, even if I can’t appreciate why. When I was capturing screens, for example, I was stunned to see that the grasslands that I’d been traveling for hours were a striking jade hue and not the golden wheat-like color that I’d imagined. Knowing that doesn’t add to my appreciation of the game or detract from it. It just is.

At a minimum, I’d recommend that everyone give Kurosawa mode a shot, with or without the Japanese audio option. It’s really worth experiencing, if only for a short while. Even with my criticisms, I plan on sticking with it, knowing full well that it’s a choice that may make my experience a little tricky at times. Worst-case scenario, I can always turn on the color when necessary. I just wish that it wasn’t.