You are now on the clock. If you don’t play Fortnite enough during a season, you won’t get the cool skin at the end of the battle pass. If you don’t log into Clash Royale every day, you are letting your clan down. If you don’t purchase Super Mario 3D All-Stars by March 31, 2021, you will have to go to eBay to buy it for twice as much.

Many of us have experienced the stress that comes with a console launch. We line up outside of a store late at night or refresh a website ad nauseam just to make sure we get the new hardware on day one. There’s a bit of excitement that comes from being one of the first people in the world to get something, but also a little bit of guilt in not being able to wait.

We thankfully don’t have to worry about video games selling out any more. If a store runs out of a game we were hoping to purchase, we can always head home and download it from a digital marketplace. We have that safety net. We know there’s a way to play the game of note whenever we want to.

With Super Mario 3D All-Stars, Nintendo is taking a scissor to that safety net. In a surprising move, Nintendo revealed this bundle, which collects the classic titles Super Mario 64, Super Mario Sunshine, and Super Mario Galaxy, will only be on sale from September 18, 2020, until March 31, 2021. After that, the game won’t be sold at retail, and it will disappear from Switch’s digital marketplace. This is a similar moratorium Disney once used for the home releases of its animated films. If you didn’t snatch up the DVD of The Little Mermaid within a few months, it would not be sold again for years. These “retired” films ended up going for big bucks in secondhand markets.

Super Mario 3D All-Stars doesn’t launch until next week, but scalpers are already eyeing it as something they can make a pretty penny off of. Ebay is filled with listings from people who know they’ll have a copy to sell. These listings are occurring at a time when Super Mario 3D All-Stars can still be pre-ordered from major retailers. These people know it will sell out, and holiday shoppers will want it for presents. 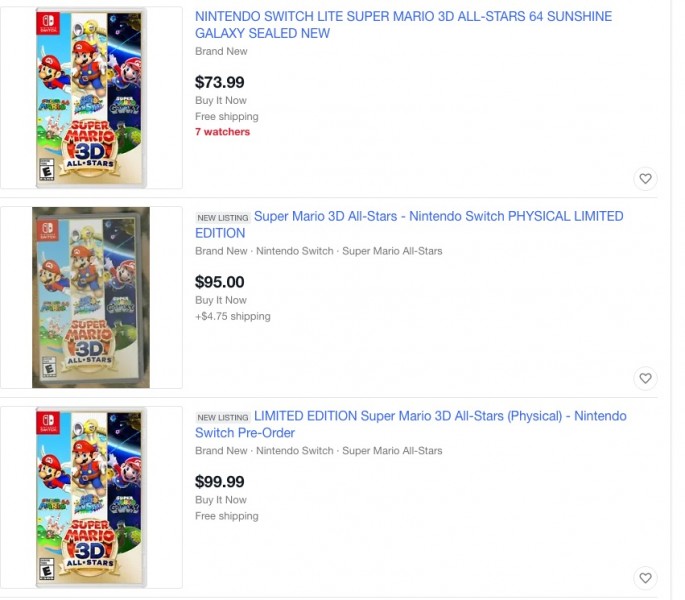 The website Express even wrote an article with the headline: “Why you should buy Super Mario 3D All-Stars even if you DON’T have a Nintendo Switch.” The author’s takeaway is you should probably get it now if you plan on getting a Switch at a later date, and if you don’t get a Switch, you’ll likely get your money back in resale given the rarity of the game.

GameIndustry.biz reported Super Mario 3D All-Stars is now Amazon’s second biggest game of 2020, and is only trailing Animal Crossing, a title that launched in the early months of the year and during a time when people were sheltering in place during the pandemic.

These articles point to madness. Flat-out madness. Nintendo is bringing back three classic games in a bundle. This happens all of the time. There shouldn’t be chaos. There shouldn’t be a rush to buy them on day one. These games shouldn’t disappear. They are all classics in their own right, and given where we are at with backwards compatibility with games, should be readily available to play on every new Nintendo gaming device moving forward.

For them to disappear makes no sense. Yes, all physical games eventually run out of supplies, but no game should be removed from a digital marketplace unless there’s some kind of license that expires. We’ve seen licenses expire in Marvel games and with songs. Limited Run Games‘ entire business is selling a limited number of physical games for titles that you can’t get anywhere else. These aren’t issues that are limiting the release of Super Mario 3D All-Stars. Nintendo is once again masterfully playing the supply and demand game with consumers. That’s all this is, and it’s shameful.

If someone buys a Switch in April 2021 and wants to play Super Mario Galaxy on it, they should be able to without having to go online to purchase the game for an inflated price. I fear that’s going to happen. I also have a bad feeling that if this limited release is successful, we’re going to see it happen again, and not just from Nintendo.

We shouldn’t be on the clock with games. We shouldn’t feel the pressure of having to buy a game or skin at a specific time. End the madness.