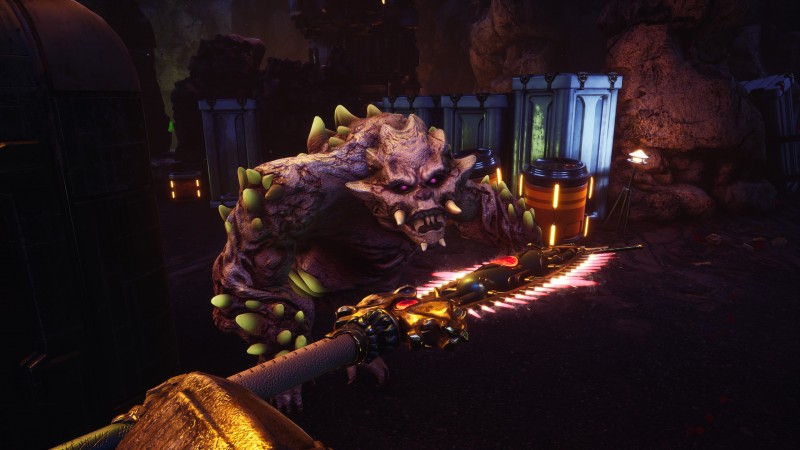 The Outer Worlds was one of 2019’s bright spots. Obsidian used its pedigree making games like Fallout: New Vegas and Pillars of Eternity and crafted an absurd sci-fi adventure that placed space colonists into a distant solar system running rampant with corrupt industrialists. While we enjoyed the game’s length, The Outer Worlds was a bit short compared to similar RPGs on the market. So, if you’re hungry for a reason to return to the Halcyon colony, you’ll have the perfect excuse this fall with the Peril on Gorgon DLC.

In Peril on Gorgon, the crew of the Unreliable discovers a severed arm that comes bundled with a cryptic message leading them to the Gorgon Asteroid. This asteroid was a former science outpost for Halcyon, which undertook many of the company’s most ambitious and disastrous experiments. Now, this giant rock is a den for monsters and lawless marauders. During your quest, you’ll encounter Minnie Ambrose, a woman who asks you to get to the bottom of a mystery surrounding her mother and a doomed science project.

“One of the cool things about working in a game that is set in its own solar system is that it’s really easy to find pockets that we have not explored yet,” says game director Carrie Patel. “It’s certainly easy to find pieces of lore that we’ve touched on but not fully developed, so we wanted to take the player to a brand-new location in the DLC, while also tying them back to some familiar base game locations with news levels and content so that everything feels continuous.”

In addition to this new area, Obsidian is raising the level cap to 33, and players can earn new perks, flaws, and armor sets. The Gorgon Asteroid is also home to several new science weapons – overpowered tools that often do wacky things that change combat. One of these weapons is the P.E.T. (Pest Extermination Tool), a melee weapon that sucks enemies closer, allowing you easily hit distant foes.

“The Gorgon asteroid itself is about the same size as Roseway, but the total play experience of the DLC, including dungeons and off-world content, is similar to the amount of gameplay you got off of the Monarch critical path,” says art director Matt Hansen. “It’s a pretty meaty gameplay experience. I think people will find that it’s a very similar experience to what they had with the base game, where it’s not this massive sprawling thing. It’s something that you can enjoy at a reasonable pace, and there’s enough variety in how you can approach it that the replayability allows for a lot of returning to that space.”

Players will be able to access all of this new content once they have completed the critical path on Monarch, but they won’t have to beat the game first. The Outer Worlds: Peril on Gorgon launches on PlayStation 4, Xbox One, and PC on September 9 for $14.99. Peril on Gorgon will also be available as part of an expansion pass that includes a second set of DLC for a total of $24.99. Either way, you should have plenty of time to read our review of the base game.