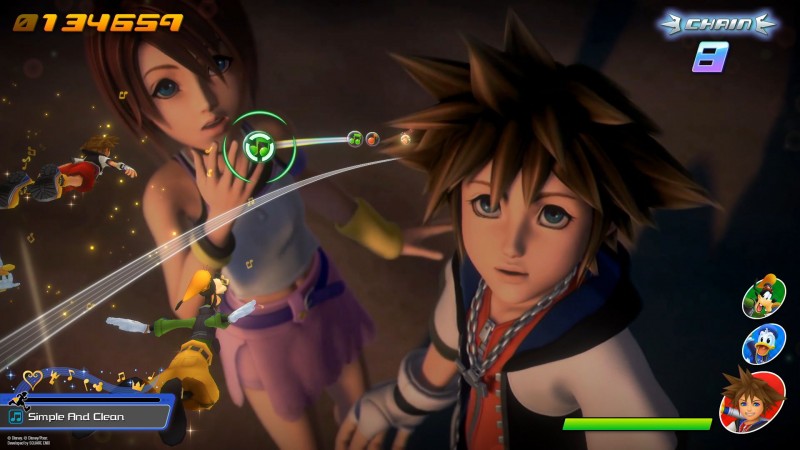 Music has always been an integral part of Kingdom Hearts. Iconic songs like “Dearly Beloved” have become core to the series’ identity, alongside poignant character themes for Kairi, Ventus, and Xion. Between acclaimed composer Yoko Shimomura’s masterful work adding emotion to every situation and Utada Hikaru’s vocals breathing life into “Simple and Clean” and “My Sanctuary,” the melodies have captivated audiences, becoming core to the experience. With rhythm game Kingdom Hearts Melody of Memory, the rich aural library is finally getting top billing, and we interviewed producer Ichiro Hazama, co-director Masanobu Suzui, and iconic franchise director Testuya Nomura about what to expect. Here are their answers to our biggest questions.

Can you discuss the creative process and how the team approached bringing Kingdom Hearts to a new genre?

Hazama: The idea was floating around for a while, it was around five years ago. [Suzui and I] kept thinking, “Oh, we would love to do a Theatrhythm Kingdom Hearts.” We were discussing it, making planning documents, and things like that. But at the time, we decided that it might be a bit difficult to move forward with the project. A few years ago, there was a separate discussion with Nomura-san and Disney. Disney actually came forward to Nomura-san, asking, “Hey, could you do this with us?” They decided that they wanted to move forward with the project and then the discussion came down to me and Suzui-san to do this project, and that’s how this project came to be. 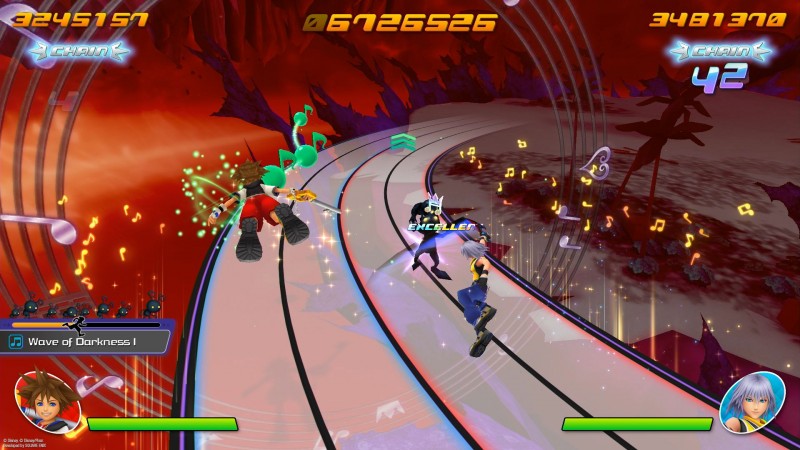 It does look very similar to Theatrhythm’s gameplay, and Square Enix had entries for Final Fantasy and Dragon Quest in that series. Why is Melody of Memory a separate spinoff rather than a new Theatrhythm game?

Suzui: As we mentioned earlier, we were talking about how we had come up with rough ideas and planning documents. But as we were discussing how we go about creating this particular title with Nomura-san, we were keen on making this 3D. With Final Fantasy Theatrhythm, you may recall we had this side-scrolling, very 2D sort of aesthetics. And then in terms of Dragon Quest, it was more of a top view where your battles are sort of going inward; there’s like this field of depth. With Kingdom Hearts, we wanted to pursue the idea of utilizing the original characters. We wanted to recreate the original look of the game titles and carry that over. We also took inspiration from [Kingdom Hearts’] 15th anniversary music site.

From there, we started to think, “Okay, so how do we incorporate different elements?” And Nomura-san provided feedback and a lot of the inspiration that went into the basic idea. We took that as well as some of the technical elements and the mechanics that were already existing in the Theatrhythm titles, and then thought about what kind of music and what kind of scheme of the notes that we want for players to experience. We [wanted to] incorporate those fun elements of play and make sure that we are leveraging the game mechanics of the original game, as well as bringing in Kingdom Hearts’ stylish action and incorporating the rich story behind it, especially the world settings that we’ve established in our series titles. We asked, “How do we leverage and keep the integrity of that?” That was our foundation for our approach.

From there, we thought, ‘Okay, so we’re going to build this from the ground up and we’re going to bring this as a brand new title.’ That’s why we decided we’re going to change up the name and we weren’t going to carry over the Theatrhythm title. We thought it would be appropriate and proper to have that Kingdom Hearts name. That’s how we moved along with the development of it. We all had the same understanding amongst our team members that this is not a Theatrhythm game. Nomura-san also [felt] that way, so he came up with a really nice name for this title and a really nice key art as well, and we kind of expanded from there. 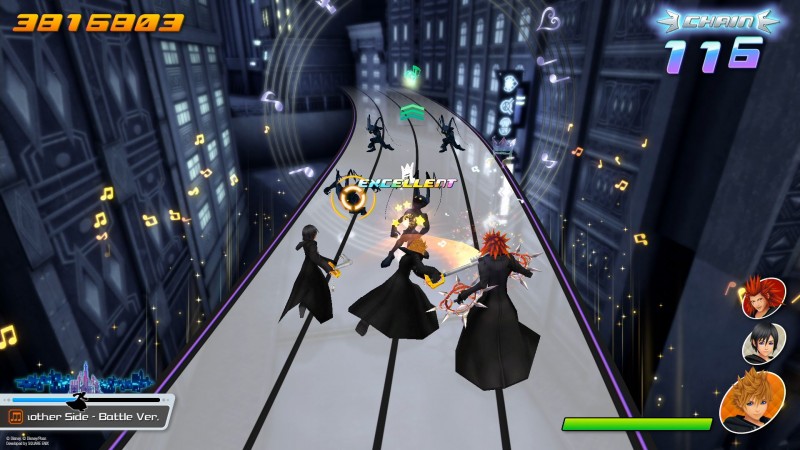 Will we see lots of remixes to songs, or are you mostly sticking to the originals?

Suzui: Generally speaking, we will be using the original music. We didn’t want to take away from the gameplay experience from the different titles in our franchise. But that being said, certain parts of the game, like the title menu or the staff credits, will have songs that incorporate a new arrangement by Miss Shimomura, so that’s something to look forward to.

Are there any new tracks in the game that we haven’t heard before?

Suzui: No. There will not be any new tracks.

With over 140 songs in the game, can we expect music from every world we visited in the Kingdom Hearts series, or are some being left out?

Suzui: We actually looked at all of the tracks that were available and we revisited all the different CDs from the past and counted all the songs. Of course, we couldn’t keep a full catalogue of the most recent Kingdom Hearts games like 2.8 or some of the songs in Kingdom Hearts III. We haven’t gotten the full count of all of the songs that are in there, but it ended up being about 600 to 700 songs. So unfortunately, there may be some songs that are not included in Melody of Memory. That being said, from our vast library, we tried to carefully select the songs, and it’s a very rich selection of over 140 songs. 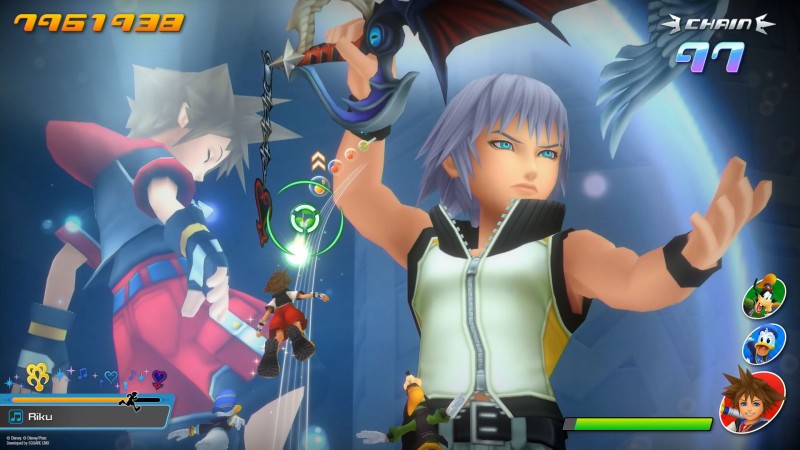 How do they approach designing the different levels and making sure the backdrops match the essence of each song?

Suzui: The primary game mode that you will be playing through is what we call “World Trip.” You’re literally going through [the experience] in order from Kingdom Hearts 1 and following it with the game’s story. You’re looking back at the experience through the music and the gameplay, and there are various movie clips of the story that you get to experience through it. In some parts, there’s some narration by Kairi, and then once you clear a few songs and different missions, you open up a gate to move on to the next section. As you progress through the game, of course, there will be different difficulties with the songs. You may notice that the enemies that appear in these stages will be from the original games, and we tried to structure it so that you’re re-experiencing the different iconic moments and symbolic elements with each of the songs. Also, the enemies that you encounter will move very similarly to how they first appeared in the original titles. You experience the overall game arc as you progress through these different songs.

With the narrative, it’s what we call the “Dark Seeker Saga,” which has been throughout all the Kingdom Hearts titles up to Kingdom Hearts III. We traverse through all of the different key elements through that saga in order. That’s the general flow. And then with the tempo and the mood of each of the stages, we have some boss battles prepared as well. Those do tend to be a little bit more on the difficult side. So there’s a good variation of difficulty levels as you play through. Now that being said, we understand that there may be players who might not be as comfortable with playing rhythm action games, and so we made sure to design the game so that players are able to complete their missions no matter what difficulty they choose.

Kingdom Hearts is an action/RPG. What kind of progression system will we see in Melody of Memory in terms of new abilities and leveling up?

Suzui: The progression system for Melody of Memory is leveling. Because it’s a rhythm action game, it was a bit difficult to differentiate the different moves and actions within the gameplay. But through leveling, your character will gain higher HP, so you won’t get a “game over” as easily, which should be beneficial when you’re trying to clear the different stages. Plus, as you level, your attack power will also increase. Of course, bosses will need a few extra hits. But as you level up and become stronger, you won’t take as long to stun them to get an advantage on attacking the bosses, and you’ll get a bonus for that. There is no ability system that you would be bolstering throughout the process. Each leader will have two different types of ranged and melee attacks, but that’s about it.

How will online battles work in the game?

Suzui: Similarly to Theatrhythm Curtain Call, there is a versus match, but we expanded on that where you have one player versus one player and you compete for the higher score, and as you win, your rating will go up. With online battles, one of the mechanics is called “tricks,” where you’re trying to not exactly sabotage, but get in the way of the other players so that they might trip. The goal is to get as many points without failing or tripping in your gameplay and competing for who gets the better scores.

We discussed this a little bit with Kairi’s narration, but what can we expect from the story and Kairi’s involvement in it?

Nomura:  So Kairi is going to be our storyteller so to speak – what she is doing is reflecting upon the previous iteration and the history of the narrative. She is going to be talking about all of what happens within Kingdom Hearts and she’s going to be bringing you through this story. And so her positioning…  I’m afraid we can’t delve too far into details, because it will be quite a bit of a spoiler and she is relevant to a very big part of the plot. But what she does tell through her recollection is not just the experiences that she went through, but it’s all the experiences that her allies and the party members had experienced throughout the story as well. And once we go through the story of recollection and beyond that, we start to see a timeline that will connect to the future. 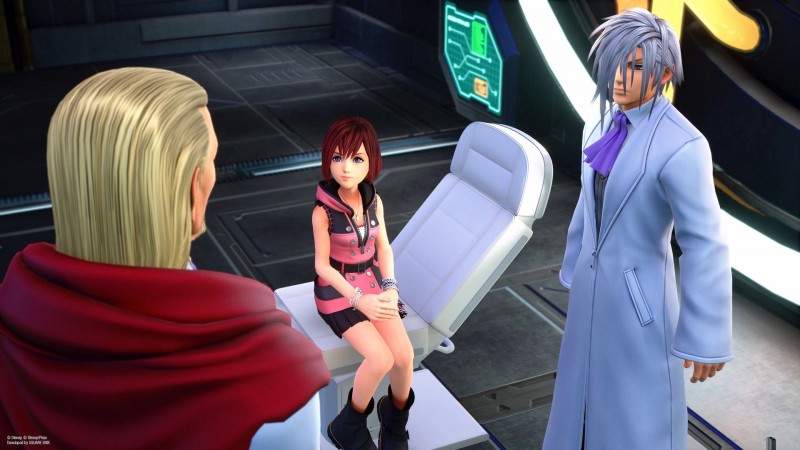 Is this going to bring closure to where we left off with Kairi at the end of Kingdom Hearts III and the Re Mind DLC?

Nomura: With Melody of Memory, the timeline fits immediately after the story of Re Mind. But with that being said, the story volume is not going to be as large as a mainline Kingdom Hearts title, so you may not see too big of a movement in Kairi’s time and in her narrative. Still, I think you might get a glimpse of where this might be going through this title. It’s quite difficult to not spoil it, but still try to explain it at the same time. But with Kairi, her childhood is still shrouded in mystery. We haven’t really delved deep into that part of her narrative, so you might be able to see a glimpse of that through Melody of Memory. But that being said, again, it’s not meant to advance things significantly through this game.

The Gummi Ship was featured in trailers. How is that going to work in the game?

Suzui: It’s kind of unfortunate this is going to be the last question because the Gummi Ship is just strictly going to be for transportation purposes, traveling between worlds. [laughs] Unfortunately, we won’t have any sort of like customization elements or anything like that.