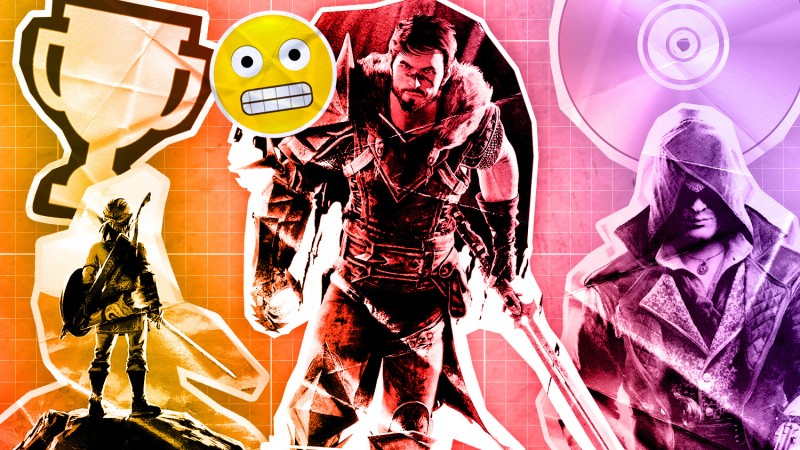 Unpopular opinions aren’t all “I hate this game” stances, sometimes it’s enjoying an adventure that really seemed to draw a lot of ire. Sometimes it’s simply not understanding a connection that the community as a whole seems to have. What’s important is that every video game hits differently and it’s okay to feel how you feel about any given title.

With our takes, we want to make sure our readers know that these are just personal opinions and in no way is us saying X game was great or Y game was terrible! These are just how certain adventures resonated with us on an individual basis or how we feel about other topics in the gaming space.

I’m a huge fan of achievements. My Xbox Gamerscore is over 350,000, and while I say it’s a product of me playing as many games as I can, it also comes from me sinking time into ‘bad’ games that give out easy achievements. Yes, I will play something terrible if it gives me meaningless points. I call them meaningless, and they are in terms of being nothing other than numbers, but I love them and find it is almost like a game within a game to see how many points I can gather to pump up those numbers.

Should I join my friends in Destiny, or spend my time grinding points in a bad game? I sometimes choose the latter. Every time an achievement rings out, I get a little excited. It’s a mini event, especially when I don’t know what the achievement is going to be.

Yeah, I play games for a seemingly meaningless number. But hey, there are worse things I could be doing with my time.

In 2014, Assassin’s Creed Unity released. It was the first entry exclusive to the PS4/Xbox One generation, and it had some problems. Even though the rough spots were eventually smoothed over, a lot of people felt burned by Unity – and I think the next game, Assassin’s Creed Syndicate, paid the price for those mistakes. But it’s a shame that Syndicate was forced to carry Unity’s baggage, because it is the best game in the series.

Basically everything I love in the “old style” of Assassin’s Creed game reaches its peak in Syndicate. You can clamber all over the rooftops of the city, but you also have a wrist-mounted zipline to make the parkour more dynamic. The timing-based combat involves just enough skill to keep you focused, but it doesn’t feel punishing. Dual heroes Jacob and Evie Frye have a full hit list of targets, but each key assassination is carefully crafted for memorable kills. Syndicate also veers into RPG territory with a skill tree and gang progression, but it doesn’t go for the drastic genre transformation seen in Origins and Odyssey. I still enjoy the current direction of this franchise, but when you distill the essence of what I want from an Assassin’s Creed game, Syndicate just nails it.

I used to care about having a huge collection of physical games. And I do think having shelves upon shelves of games looks kind of cool. But, on the other hand, you’re stuck with having shelves upon shelves full of games. Physical copies take up a ton of space, and this past generation has shown that there’s really not any point in having them. Most of the time, they’re just shiny dongles that let you download the actual game onto your console’s hard drive. And once it’s installed, you’re trapped into needing to track down the disc to actually play the thing.

I’d rather just skip the middleman and download my games. Having a virtual library makes it easy to access everything. If I’m traveling, I can log on to another console and download whatever games are on my account. And if I don’t have internet access for some reason? Maybe that’s a sign that I should be doing something other than gaming.

My “unpopular” take? Stop arguing. Games can be considered “great” even if I don’t personally like them or connect with them. One of the things that makes gaming so awesome is how developers can create interactive experiences that cater to varying tastes and fill different needs. I feel like every time I venture into the comments section of a game, be it The Last of Us Part II, The Legend of Zelda: Breath of the Wild, or Pokémon Sword & Shield, they’re rampant with arguments about why a well-liked game is actually bad.

On top of that being a boring, too-easy contrarian take, it also supposes that everyone shares your tastes and your experiences. Learn to stop saying “Game X sucks,” and if you want to chime in with your negative take, talk about why you personally didn’t like it and what elements could be improved upon. Not only does it give your criticisms more weight and not rain on the parade of someone who enjoys the game, it also provides constructive criticism to the developers, who are, by the way, real humans who pour their hearts into their work and have feelings.

The world is divided and hostile enough. Video games, and by extension, the communities formed around them, should be an escape from these conflicts. Whether you’re discussing the latest gaming phenomenon with your closest friends or talking about which next-gen console you’re going to buy, be respectful and try to see the other side of the coin. You may even be a little happier as a result.

Dragon Age 2 got a lot of heat at launch, and rightfully so. It was a very different experience than Dragon Age Origins in every conceivable way and the repeating areas and short length did not help that fact in the slightest. That being said, when I first played DA2, I was also disappointed but being a completionist that wanted to experience every romance, I revisited it quite a few times after that first playthrough. It was during a later playthrough that I realized the hidden magic in the sequel: It had some of the most enjoyably fleshed-out characters with full story arcs that felt complete and organic despite the title’s short length.

Despite how short it was, I’ve also found myself constantly discovering new things in the game: voice lines, character interactions due to party changeups, and small character quirks. Dragon Age 2 had a lot mechanically off with it, but that public opinion buried the parts of this game that truly shined: The characters were all so unique to each other, the pacing of the decline felt real and daunting, and the friendships/relationships made within the sequel made it personal, impactful, and a phenomenal prelude to what later kickstarted the events of Dragon Age Inquisition.

Bonus take: I never could connect with The Legend of Zelda: Breath of the Wild the way others seemed to. Lord knows I’ve tried and I tanked way more hours into this game than I should have considering I didn’t enjoy it, it just didn’t click with me for some reason. Glad others love it though!

I prefer to play some games on easy mode because I don’t have hours to spend building skills for every game and I still want to be able to play them even if I’m not good!

Super Mario Party is an amazing game that doesn’t get the credit it deserves. It’s great for all ages; grandparents can play with their grandkids, it’s fun to play at college parties, and pretty much all ages in between. The best part about the Mario Party series is that, no matter how long you’ve played, the playing field is always fair. Sure, games like Fall Guys implement Mario Party-style mini-games, but if you play 80 hours of Fall Guys you’re going to have an advantage. If you play 80 hours of Mario Party, the only thing you’re going to have is a good time.

Mario Party is cute, it’s silly, and you can be as wholesome or jerklike as you want – it’s going to be fun no matter what. We love the jelly beans of Fall Guys, but Mario Party is where my heart truly lies.

What are your unpopular gaming takes? Sound off in the comments section!