Microsoft has unloaded a slew of information about its next-gen consoles, and it’s a lot to take in. Of particular importance for gamers trying to budget for the holidays, the long-rumored reveal of the Xbox Series S means that there will be a choice to be made between the two distinct products.

While Microsoft will almost certainly have new details to share as the launch nears, there are a few big differences between the Series X and Series S that can already help you to reach a buying decision.

First, with a $200 price difference (Xbox Series X: $499, Xbox Series S: $299), the Series S is positioned as a far more budget-friendly option that will still allow players to enjoy next-gen games. The Series S is also nearly 60% smaller than its more powerful cousin, making it an easier fit into smaller shelf spaces.

Of greater importance for most players, however, is distinctions in technical capabilities. While the full tech specs articulated in the below video and comparison image tell a more complete story, the short version is that the Xbox Series S runs at a reduced rendering resolution. The Series X runs native 4K, while the Series S offers a similar experience at 1440p. However, it’s worth nothing that the Series S does upscale when connected to a 4K TV. In addition, both Xbox Series X and Series S are capable of offering 60 fps, with support for up to 120 fps.

For a complete picture of the distinctions between the two new Xbox consoles, check out Microsoft’s official video overview of the Xbox Series S, included at the end of this article. And for a one-to-one comparison chart, check out the embedded picture below (click on the image to enlarge) to get a sense of the components that separate the two devices. 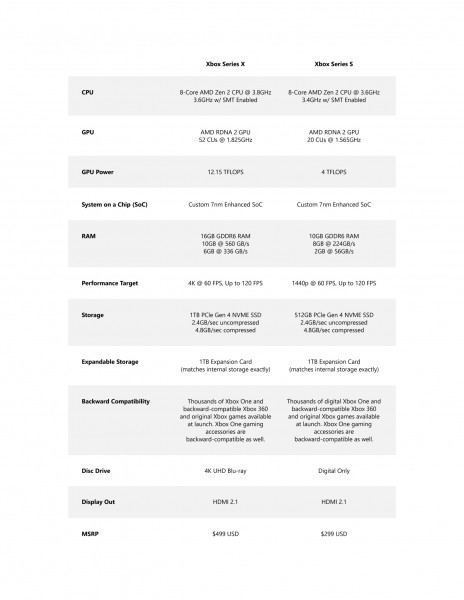